The main objective of the project is to analyse how autonomous navigation can be proven to be safe.

The aim of the project is to perform a simulator-based risk identification for autonomous shipping traffic. Increasing the level of automation implies that the goal-based standards for shipping need to be based on a risk assessment that reflects the expected roadmaps towards autonomy. Based on two use cases, the routes Fredrikshamn-Göteborg and crossing of the Ljusterö fairway, relevant risks are identified based on ship simulations performed by mariners describing especially nautical challenges for more autonomous shipping resulting in a common risk model.

Few topics are discussed as often as safety with automated transport, not only in shipping but also in road transport. A recurring question is “How do you know that an automated vehicle is safe enough, and what exactly is safe enough?” The irony of it all is that automation is expected to improve safety. The whole industry has started to rethink and re-evaluate its safety strategies as autonomous safety is complex and costly which can be exemplified by the accidents that occurred with automated vehicles.

A consequence is that more transparency and cooperation is required in the industry, and that one cannot afford to compete in terms of safety. Part of this development is the need to standardize systems, techniques, methods and testing, which at the end demands the creation of guidelines for assessing safety levels. In order to proof safety, the technology developers and end-users need to ensure that automated transport is safe by:

1.Establishing metrics and methods for testing,

3.Sharing, among AV developers, of data collected during testing,

4.Building a feedback loop, and

Lately, the industry has therefore focused on nuanced estimation of risk instead of metrics such as kilometers/ time travelled of autonomous systems, number of accidents. Questions that need to be solved in this context are how the type-approval process needs to be adapted and the role of third-party actors in the safety assessment.

Today, a modern ship already includes complex automated systems and currently the shipping industry experiences a drive towards even smarter *) and more automated navigation of ships. The technological development has allowed for a gradual reduction in crew. Increased data collection, processing and interconnectivity capabilities, enabling the automated systems to be controlled remotely or by algorithms, may gradually further reduce manning and even result in unmanned ships. This has the potential to increase safety, improve the environmental performance of and enable more cost-effective shipping when done in the right manner and supported by appropriate validation methods. Little research and innovation work have been performed in relation to appropriate methods to test and ensure safe operation of more autonomous ships, a crucial step for ship-owners prior to investment decisions. The level of complexity a ship can encounter is exemplified in the matrix below. In the future, several layers of complexity need to be covered by automated systems which have to be reflected by the validation and verification methods, performed by a third party. The matrix indicates for various risk areas an increase in complexity, when combining these areas of complexity, the resulting challenges increase further.

Traditional ships are classed. Class rules often set restrictions and type approvals on single components or devices, but seldom on whole systems. As ships and ship systems get more complex and susceptible to failures, new methods are needed to ensure safe operations of ships. Software updates and upgrades of systems are often not part of class-approvals but provide new functions and automation, which were originally not evaluated.

Today’s risk assessment methods, application of methods and models used in shipping are usually based on humans being directly in charge of ships, VTS, port controls, etc. and may not be sufficient to reflect and evaluate the complexities and inherent risks of introducing further automation and digitalization in the shipping domain (a lesson learned from the work that RISE is involved in around the research facility AstaZero).

The introduction of smart ships will create traffic situations between manned and unmanned ships where on one hand decisions and actions are based on algorithms and on the other hand by a human operator where a large part of the decision making.

Increasing the level of automation implies that the goal-based standards for shipping need to be based on a risk assessment that reflects the expected roadmaps towards more smart *) ships and so far, research on autonomous transportation has focused on other parts than the effect of introducing and mixing different levels of automation and only very basic standards have been proposed by classification societies, where DNVs standards [DNV, 2018] have two pages in the appendix on basic set-ups for testing and validation. 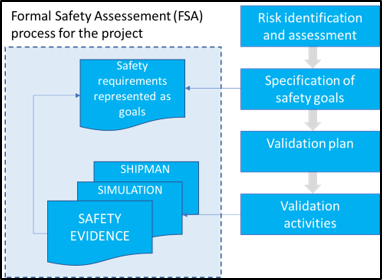 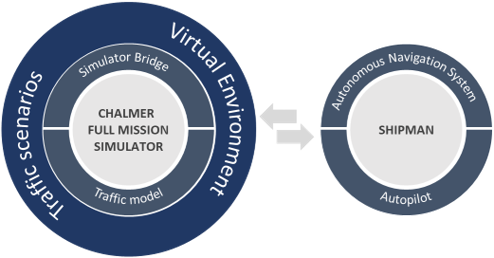