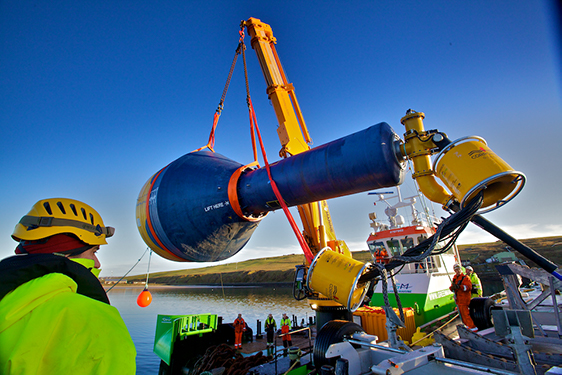 Results support a step-change improvement in survivability and competitiveness of wave energy.

After 18 months of combined dry and ocean testing of the C3 Wave Energy Converter (WEC), CorPower and project partners have taken important steps towards proving commercial viability of wave energy. By verifying the ability to solve the two major challenges for wave energy, storm survivability combined with significant power production, a major demonstration milestone has been completed. The resonant WEC tested adds new functions to wave energy that are key to unlocking this untapped source of clean and predictable energy:

– A novel storm protection mode that makes the device largely transparent to incoming waves was proven effective in minimizing motion and loads, providing robust operation in storm conditions. This new function for WECs can be compared to wind turbines that pitch the blades to minimize storm loading, a function found in essentially all commercial wind turbines of today.

– A novel phase control technology called WaveSpring, that delivered the projected amplification of motion and power capture performance in operational sea states, enabling a threefold increase in average power capture for a given buoy size. The measured power production with C3 in the ocean was consistent with the expectations from simulation models and prior dry testing with simulated waves.

“We’re delighted with the success of the project, funded by Wave Energy Scotland. CorPower’s WEC has been put through a rigorous 18-month test programme, beginning with onshore power take-off tests in Sweden using a bespoke hardware-in-the-loop test rig, and culminating with ocean testing at EMEC’s scale test site at Scapa Flow in Orkney. EMEC has overseen the dry and wet testing of the machine, ensuring strict quality management and quality assurance of the verification process and providing Performance Statements for both stages. We are looking forward to further supporting CorPower as they develop their next iteration WEC using the learning from the C3 tests.”

“This is the first of the WES supported technologies to be successfully tested in real sea conditions, and takes us a step closer to demonstrating cost wave energy technology can be cost competitive with other forms of low carbon generation. We are keen to see this technology demonstrated at full scale.”

“Based on the results, the projected performance of the next generation commercial scale C4 machine has been increased. With C4, the structural efficiency of wave energy is expected to improve by more than five times compared to current state-of-the-art, bringing wave energy above 10 MWh/ton, which is comparable to leading wind turbines. Getting more energy with less equipment means lower CAPEX per MW. Smaller lighter machines are easier to handle using low cost vessels, giving less costly operations and maintenance.”

“Wave energy is a large untapped source of renewable electricity, with a harsh environment that brings many technical challenges. Corpower has developed a promising wave energy converter with the support of the Swedish Energy Agency. The successful completion of the Stage 3 demonstration project is a key step in bringing Corpower’s technology to commercial maturity. We are pleased to be funding also Corpower’s next stage with a single full-scale device, followed by an array of another three devices.”

“CorPower is one of the great InnoEnergy success stories, which has gone from strength to strength since our first investment in the company in 2012. Since then it has established itself as one of the leading companies in wave energy, which is proven once again with these breakthrough results – yet another huge step forwards on its journey to commercialisaiton.”

“Ocean Energy could see 100GW of devices installed by 2050, generating 10% of current EU electricity consumption. Improving reliability, survivability and reducing costs have been identified at EU level as key factors to get there. It is with successes such as Corpower’s that this will become a reality.”

The project that was financed by Wave Energy Scotland, InnoEnergy, Swedish Energy Agency and Interreg Foresea has demonstrated technical capabilities to produce electricity at a competitive cost as volumes increase. This breakthrough in wave energy is based on 30 years of research in hydrodynamics and phase control technology, now proven in its natural environment.